Getting the snip gets a bad rap—but if you’re done with kids or never want any, don’t let rumors stop you from learning more.

Myth 1: Getting a vasectomy is painful—maybe even dangerous.

We hear you—you’re wary of any operation involving the family jewels. Fortunately, vasectomy is very safe and is done as an outpatient procedure. The procedure itself takes about 10-20 minutes, though many clinics will also require a separate counseling visit (20-30 minutes). Vasectomy is always performed with anesthesia, which can be given by a standard needle, mini-needle, or jet-spray. The anesthesia is usually the most uncomfortable part—on average, 2 out of 10 on a pain scale. The vasectomy procedure itself is rated 0.5 out of 10 on average on the same scale. After getting a vasectomy, you should rest for 1-2 days, avoid heavy lifting for a week, and wear tight underwear and use cooling packs (or frozen peas) to minimize pain and swelling. Most people who get a vasectomy only need over the counter pain medications (eg. Tylenol, ibuprofen) and can return to regular activity, including sex, after a week.

Myth 2: I won’t be able to get an erection or have an orgasm.

A vasectomy works by blocking the tube where the sperm travels. The tube starts at the epididymis where sperm is produced, passes the prostate and the seminal vesicle where sperm meets up with other fluids that make up semen, then comes out through the urethra. A vasectomy blocks the part of this tube near the testicles, so the penis is not affected in any way. Studies show that men who have a vasectomy report no change in their libido or their ability to have an erection or an orgasm. 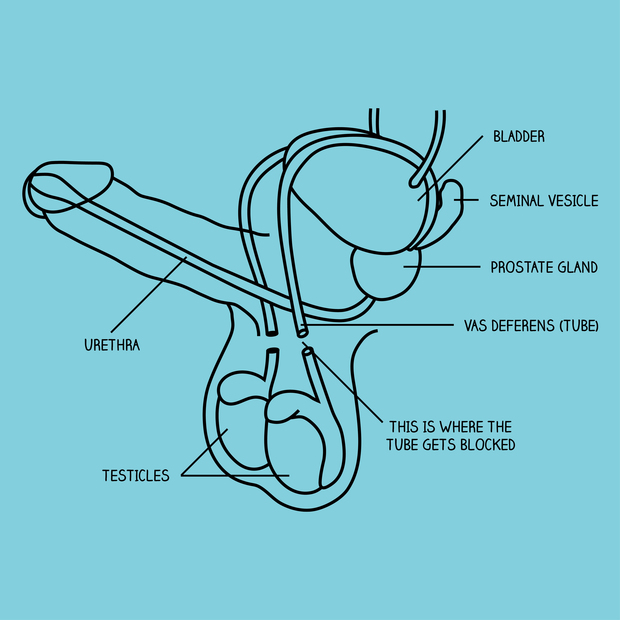 Myth 4: Vasectomy is the same as castration.

Castration is the removal of the testicles (balls). As described in myth 2, vasectomy only affects the tube the sperm travels through, so your testicles remain intact and totally unharmed.

Myth 5: My sperm will build up and my balls will explode.

After a vasectomy, your body continues to produce sperm. But where does the sperm go when the tube has been blocked? The sperm doesn’t build up—it’s just reabsorbed by the body as it’s produced. Some people may temporarily form a sperm granuloma due to an inflammatory reaction during the absorption process, but this typically resolves in 2-4 weeks and can be treated with an anti-inflammatory painkiller like ibuprofen.

A vasectomy is a great form of permanent birth control, so if you’re done having kids or know you don’t want any, don’t let myths and misinformation stop you from considering it. Want to learn more? Check out this comparison of vasectomy and female sterilization or learn more about costs and insurance coverage for male birth control methods.

Grace Shih, MD, MAS, is an Assistant Professor at University of Washington. She completed her family medicine residency at Brown University and her family planning fellowship at University of California, San Francisco. When she’s not seeing patients, you can find her cooking, playing guitar, or traveling with her family.

birth control
Sterilization
A permanent solution for those who are sure they don't want a future pregnancy.