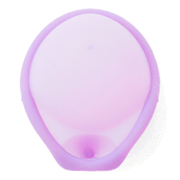 In the beginning, they were cautious about STIs and pregnancy, so they used condoms to protect against both. Now, as an exclusive couple with a clean bill of health, they use a diaphragm and go condom-free. (Except when she’s ovulating; that’s when they double up because women are more susceptible to getting pregnant around the time of ovulation.)

In the heat of the moment—if his girlfriend hasn’t already inserted it—Justin admits that a diaphragm does require a certain level of accountability because they have to stop and put it in. But he also says the extra sensation from not having to wear condom is a very worthwhile perk. Diaphragm
Rachel, 25, diaphragm
"Put it in. Have sex. That's basically it." Diaphragm
Nicole, 21, diaphragm
"I use the diaphragm—it's spontaneous like me." Diaphragm
Veronica, 24, diaphragm
"You don't need to have some sort of "sex schedule.""
1
Is the diaphragm right for you?