The answers to all your questions about virginity and its mythical guardian, the hymen.

What is a virgin? The word is generally understood to refer to someone who’s never had sex, but that leaves a lot of room for interpretation. Does oral sex count? If a woman only has sex with other women, is she a virgin? A woman who has only experienced forcible intercourse or rape is considered in some cultures to have “lost her virginity,” as if she were somehow at fault—which is completely unfair, sexist, and wrong! It may be useful to remember that there can be a first time for many sexual activities, from first kiss to first genital touches to first orgasm, rather than to focus on virginity status.

Which brings us to the hymen. It’s gotten a lot of attention throughout history, yet many people couldn’t define or describe it, and many drawings of female anatomy leave it out altogether. Some people think the hymen blocks entry into the vagina. In reality, for almost all women who’ve gone through puberty, the hymen is a very stretchy thin ring of vaginal tissue at the opening of the vagina that doesn’t block anything at all. The best way to think of the average hymen is that it’s like a scrunchie (the hair thingy).

Here are some of the myths I’ve heard most about the hymen and its connection to virginity.

Myth 1: The hymen must be broken the first time you have sex.

The biggest myth about the hymen is that it breaks when a woman first has intercourse, and that this results in bleeding that makes it clear whether she was a virgin. In the past, some cultures have made an issue or even a ritual of examining or displaying bloody sheets from a wedding bed to show that the young woman was a virgin. Of course the husband wasn’t expected to be a virgin or to prove his sexual purity.

In reality, many women do not experience tearing or bleeding of the hymen the first time they have sex. That’s because the hymen is stretchy, like the scrunchie. 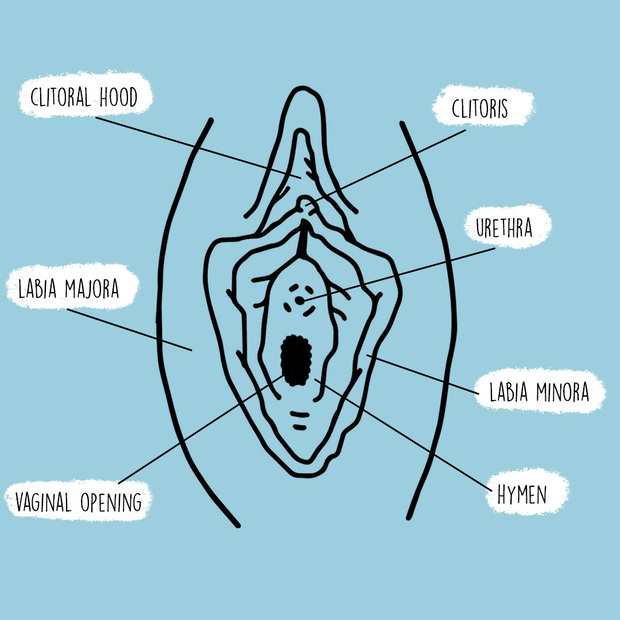 One harmful result of this myth is that it makes some women worry about pain and bleeding the first time they have sex, which can make it harder to get turned on. When a woman is aroused, the muscles near the opening of the vagina can be relaxed, and the vagina creates natural lubrication so that sex is more comfortable—even if it’s the first time. Worrying about pain can lead to tightening of the muscles and less lubrication, which can lead to pain or bleeding.

Myth 2: A Gyno can tell from looking at the hymen if a woman is a virgin.

Another common myth is that a health care professional can tell whether or not a woman has ever had intercourse by examining her hymen. In fact, after puberty, in the absence of injuries that might rarely occur from rape, a doctor CANNOT TELL! The hymen is very stretchy and, for the vast majority of women, is open like a donut. Think again of the scrunchie.

If virginity has to do with first sexual experiences, using tampons definitely doesn’t count. What can occasionally affect use of tampons are some natural but relatively rare variations of the anatomy of the hymen. One variation is a thin band across the opening called a septate hymen. Another is a very small opening called a microperforate hymen. For about 1 in 2,000 girls, the hymen has no opening, which is called an imperforate hymen. This results in significant monthly pain occurring after the time of the expected first menstrual period (around age 12 to 12 ½ on average) and no menstrual bleeding. What if we empowered girls to take a look with a mirror? It’s an especially good idea to look with a mirror if or when deciding to try tampons—and if questions come up, a health care provider can answer them!

Like tampons, gynecological exams are all about health, not sex. Inspection of the external genitals (just looking) is recommended by the American Academy of Pediatrics as a routine part of health care for kids and teens. The Pap test, an exam to detect precancerous cells from the cervix, typically involves the use of an instrument called a speculum to spread the walls of the stretchy hymen and vagina and is generally recommended starting at age 21. A speculum exam may be needed before the age of 21 if there are specific symptoms or problems.

Myth 5: A sexual partner can tell if a woman is a virgin.

See myth 2. If an experienced gynecologist can’t tell if a woman has had intercourse, then how on earth can a partner? On the other hand, being open with your partner(s) about your sexual history can build trust and keep you both healthy and happy.

The word hymen comes from the Greek word for membrane or skin. Hymen was also the name of the Greek god of marriage. While ancient myths have the potential to inform us, in this case it’s time to get informed about anatomy and take a more enlightened view of sexual relationships. Let’s discard the myths about the hymen and virginity and the outdated ideas about female sexuality that go along with them.

Paula Hillard, MD, is Professor of Obstetrics and Gynecology at Stanford University School of Medicine in California, where she teaches and has a clinical practice of pediatric and adolescent gynecology. She bikes to work and enjoys the fruits and veggies her husband grows in their yard. When she’s not professing, she enjoys being with her family, including her adult kids and precocious grand-daughter, as well as reading, writing, editing, walking, baking, and singing.